Here’s a working plan for my next several weeks.

I’ve done a really great job of building muscle, leaning out some and my endurance is great now for running my half marathons.

My goals are not (really) weight related. I mean, would I like to be a certain weight? I’d be lying if I said nope, doesn’t matter. I just have no idea what that number is.

What’s important to me is that I get the fat off my body. My body fat percentage is REALLY high and that’s the number I’m focusing on. I am strong. I have muscle. It’s all just hidden and it makes me obsessively irritated that I am struggling with this part of my plan.

Brandon had me up my calorie intake daily. Not gonna’ lie. It scared the shit out of me when he told me that I should be eating around 2700 calories a day. We compromised, and I’m eating 2000.  I did lose 4 lbs the first week, now I’m stuck again. But it’s my fault. With the NFC Championship game, SuperBowl, oh just me thinking “a couple of beers won’t kill me..” I plateaued so quickly. Again.

So… Here’s my plan for food for a bit

I decided to pre measure, and pack our lunches. Even though I work at home, it’s still nice to just grab and go.

Here’s what I did: 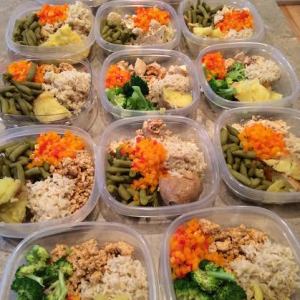 Chicken breast (I bought the frozen tenderloins)   Spray pan/cookie sheet with PAM, arrange frozen loins on pan, sprinkle with Mrs. Dash’s or whatever seasoning you want and bake at 375 for about 30 minutes)

OR Ground Turkey Breast (cooked like taco meat on the stove top, season with taco seasoning (low sodium or half the amount normally used)

Brown rice (cooked in water, in the rice cooker)

Sweet Potatoes (I wrapped in foil and put in the crock pot on high for 4 hours) You could also microwave or bake.

The above are our lunches.

Dinner is the same, but will up the protein to 6 oz instead.

My morning snack is 20 raw almonds (which I counted out and bagged this weekend to make sure that I don’t take 26 or 56 in a serving….) + an apple (about 200 grams) or a sliced kiwi with the skin and a hard boiled egg  OR string cheese, apple (or kiwi) and an ostrim stick.

Not sure yet what I’m going to have in the evening for a snack. I want popcorn, but I think it might be contributing to stalling me so I’m going to cut it out or cut it down to 2x a week instead of every night.  I might end up moving the edemame to the night time snack. We will see…..

If I have a sweet craving, I might have a Protein Snack bar (premier nutrition CRISP bars from Costco)

I will change the protein out also and incorporate fish. (tilapia, salmon, cod and halibut)

With those, I may also make the cabbage/salmon/newmans own light honey mustard meal that Heather turned me on to. YUM.

And of course, weighing, measuring and logging it all in Myfitnesspal.  No exceptions.

vobocofitness.wordpress.com/
Cooking with a Wallflower
The Flexible Baker

Fitting as much into as little as possible

Thought Catalog is a digital youth culture magazine dedicated to your stories and ideas.

jousting with the windmills in my mind

This site is the cat’s pajamas

I'm Bikini coach, Tracy. I'm 54 and have been a coach for 38 years. My site is all about IIFYM, fat loss and bikini competition strategies! xoxo

Have your cake and eat it too, without feeling sick.

Get Fit Over 40
Running, Lifting and Life

The day to day of a marathoner in training and self admitted gym rat.

My Foray Into Food Storage

Let us inspire you in your running journey